LEDAS Geometry Comparison makes it easy to compare 3D models and clearly pinpoint all of the differences between them, which are shown as groups of modified faces. LGC maps topological elements of two 3D models and restores their associativity, allowing attributes, parameters, and constraints to be translated from one model to another. Built-in adjustment technology makes it possible for LGC to compare models that even were translated (moved) and rotated with respect to each other.

LEDAS Geometry Comparison (LGC) technology is available for licensing as a component. You can integrate LGC into your software through our easy-to-use API, accessing all of its capabilities and so providing additional value to your customers.

The software supports an extensible set of open and proprietary 3D part and assembly CAD formats. The cross-platform LGC code runs on 32- and 64-bit Windows and Linux, in both traditional and parallel MPI (message passing interface) versions. The LGC application programming interface is tuned for work in the cloud, making the integration of LGC into customers’ cloud-based systems as simple as possible.

LEDAS cooperates with start-ups and market leaders, and provides beneficial licensing to early adopters of LGC technology. LGC benefits developers in these scenarios:

LEDAS offers potential customers a free, time-limited evaluation of LGC components under the terms of a standard non-disclosure agreement. To obtain a license for LGC, please contact us at info@ledas.com. Commercial LGC licenses are based on annual payments; the terms are available upon request.

LEDAS Geometry Comparison (LGC) software deals with the problem of detecting differences in 3D models within a specified tolerance. 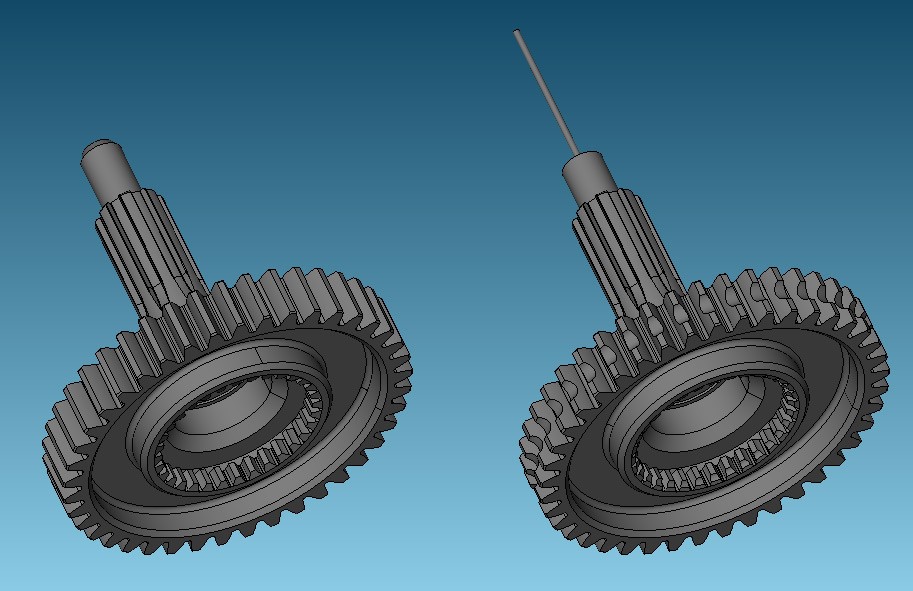 Three-D models used by industry are entities with quite a long lifecycle. They are typically modified by several designers, engineers, and technologists. Due to trends like specialization, global cooperation, and outsourcing, the number of persons working on the same model increases greatly. Today, 3D models are reused in many assemblies and derived products, making their lifecycles longer than before. This creates an urgency in controlling the model’s geometry, and checking for differences between models. 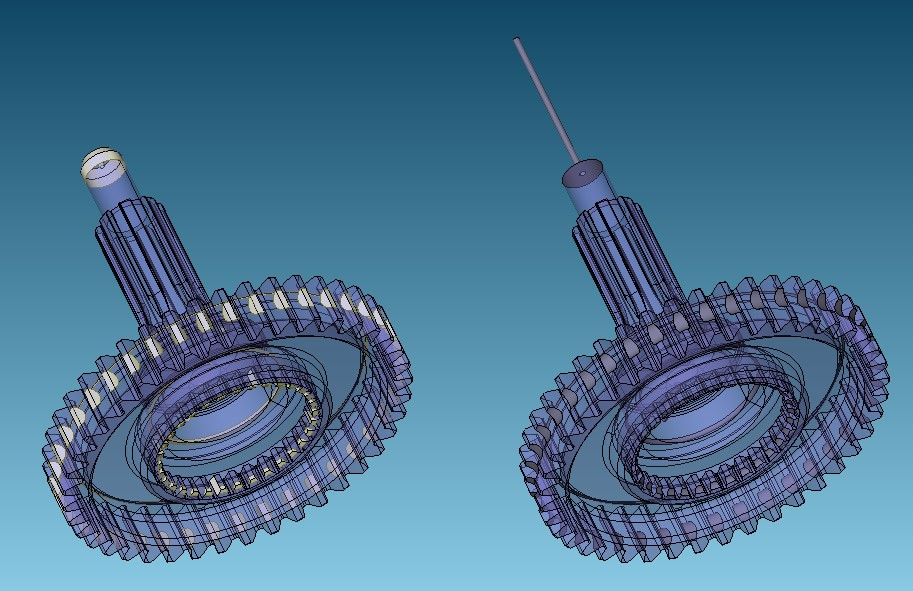 When comparing two similar-looking 3D models, it is essential to distinguish between differences that are important and defects that are negligible. So this makes 3D model comparisons very different from a simple text comparison, where only text that is fully identical is considered as having no difference. Geometrical comparison allows detecting and visualizing tiny changes that would be missed by human eye. 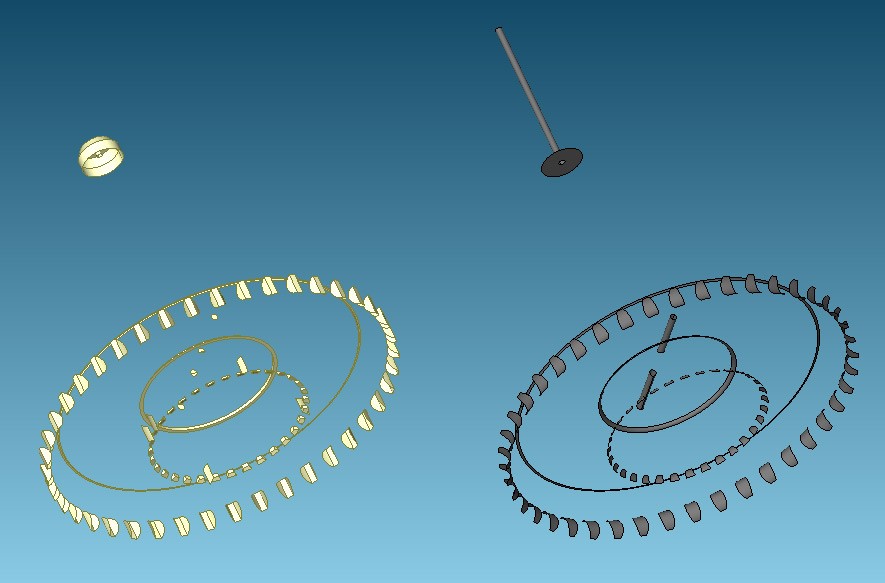 Tracking model modifications during its lifecycle is one scenario of LEDAS Geometry Comparison usage. Another is quality assurance of code that uses geometric computations to generate 3D models. Those who develop this kind of code are interested in automated testing of the code. As a general rule, this includes controlling the changes in the output. This control could be done by comparing the original output with the newly generated models by LEDAS Geometry Comparison.

Until now, geometry comparison has been mostly done through Boolean subtraction operations, which is a core function of geometric kernels, such as Parasolid and ACIS. The difference between 3D bodies was found by subtracting the volume of one body from another. This was a motivation for LEDAS to develop new innovative technology of geometric comparison, implemented in LEDAS Geometry Comparison. 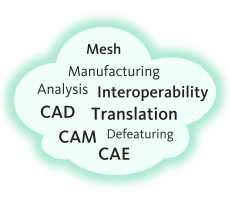 At every stage in the lifecycle of 3D models, they face modification in the following areas:

Thanks to LGC, every actor in this design and production process knows what was changed by their associates. 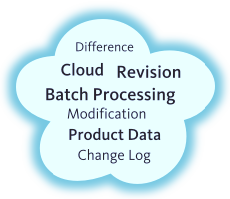 “Revisions of models” is a basic concept in any PDM (product data management) system. Yet, at the same time many PDM systems are unable to provide users with information about the actual differences between revisions. LGC adds value to its PDM licensees by making it easy to compare revisions and pinpoint differences.

LGC is optimized for batch processing large numbers of files, and is especially fast in checking the identical geometries. Its parallel processing capability in the cloud makes it ideal for processing big data. 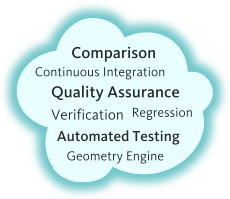 Automated testing is the best silver bullet against bugs, for ensuring quality assurance. It works well when the software produces text output, making it easy to check that the results hasn’t changed since the previous revision of the source code. But this becomes difficult when dealing with code that produces geometry, not text; how to compare geometric data easily?

As a geometry comparison engine, LGC solves the problem of automated testing of any code that produces geometric data, such as geometric kernels, data converters, tessellation engines, and modeling libraries. Using it brings your quality assurance processes up to a new level. 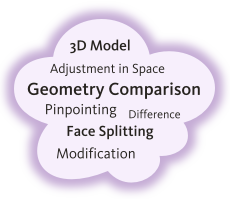 Comparing two similar-looking 3D models is like comparing text using tools like those provided with Microsoft Word. LEDAS Geometry Comparison (LGC) is the solution that pinpoints differences between similar geometric models, just as revision control systems do with text.

LGC uses tolerance control to separate important differences from those that are just small defects generated by import translations. When just part of a face is different (and the remainder of the face matches the face on the other body), then LGC subdivides the face and highlights the area that does not match. All the differences are collated and then presented to users in list and model views.

When one model is translated or rotated relative to the position of the other model, then LGC first computes the transformation to adjust the models in space before comparing them. 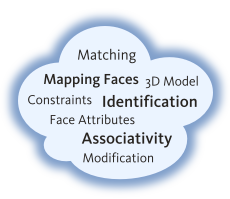 After a model is modified, it still can look very similar to the original, but usually the mapping between faces is missing. For instance, if the original model is a component in an assembly, there is no way to replace it automatically with a modified model. This is because constraints in assemblies are applied to specific faces, and through the editing process the system loses the correspondence with faces of modified models.

LGC matches faces again between two models, and provides the result of the re-mapping in a report. It easily transfers the attributes of faces (such as colors, transparency, textures, and physical parameters) from the original model to the modified one; it recovers constraints, and it updates assemblies. 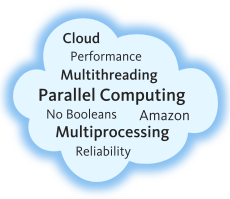 Robust and Fast Parallel Computations in the Cloud

The reason behind the development of LGC was to create a solution that would be much faster and more robust than existing software from competitors. The geometry comparison functions in mainstream CAD systems are based on non-stable Boolean operations; models with just a thousand faces can take as long as an hour to process. In contrast, one-core LGC instance compares such models in seconds, and then delivers a report of all the differences it found and the faces it matched.

LGC was developed right from the beginning as parallel, multi-threaded, multi-process software for the cloud. This is a significant advantage for our technology. Our installation running on an Amazon cloud obtained exciting results: it was up to 5x-6x faster on 8 cores, and up to 15x faster on 32 cores.

The LEDAS team has many man-years of experience in the research and development of Boolean operations through its work on the Russian Geometric Kernel (RGK) project. They know in detail the drawbacks and bottlenecks to the Boolean approach. In particular, Boolean operations are not that reliable in complicated cases due to the construction of the so-called Intersection Graph. (It defines how parts of the original body are merged to produce the resulting body with only valid topology – no self-intersections, unbounded faces, hanging edges, and so on.) 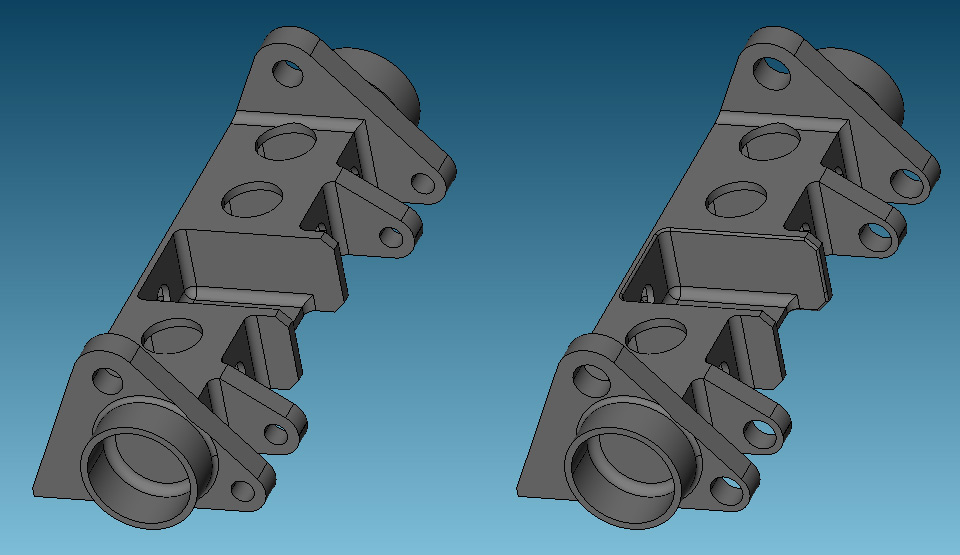 From this, the LEDAS team created its innovative technology that compares 3D geometry without using unstable Boolean operations. Instead, they use a mixture of powerful methods, including bounding volume hierarchies, identification and mapping of similar entities, and local search routines.

Experts in 3D geometry know that there are two levels of geometry representation: topology (made of faces, edges, vertices), and underlying geometry (surfaces and curves that define the form of faces and edges). It is relatively easy to map topology of one 3D model to the topology of another model: each entity gets its counterpart, and if mapping for some entities does not exist, then the difference is found at the topological level. It is more complicated to find difference (or to check that there are no differences) when taking into account actual underlying geometry and specified tolerances. The solution developed by LEDAS makes it possible to detect differences at both the topological and geometric levels. 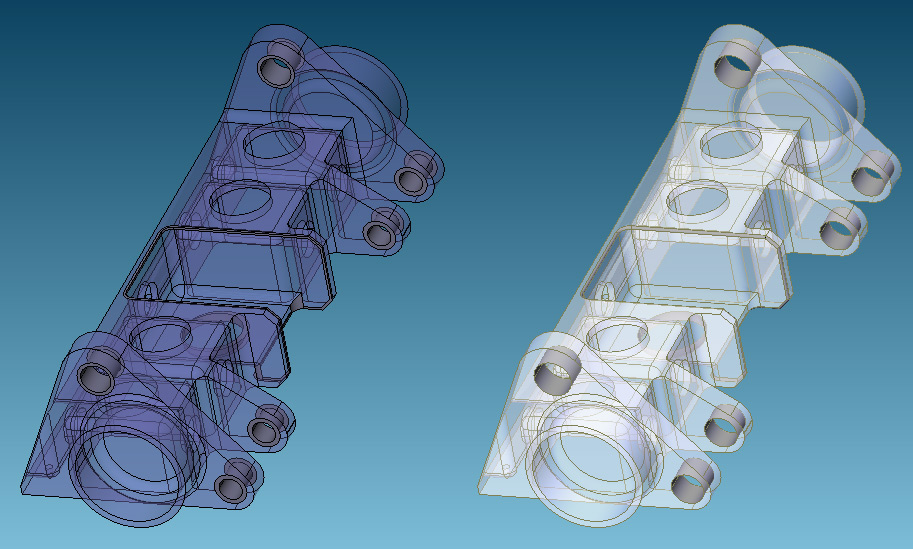 Also important is the information provided by the software to the user. Some competitors illustrate differences as set of points on one model that do not lay on the second one. Another software marks faces that do not match faces on the second model. The approach LEDAS takes is more informative: they output all the faces and parts of faces that lie beyond the tolerance of the second model; for the remaining faces and parts of faces, they provide identifiers of faces that match.

This level of information is useful to both the user and the software that processes the output through APIs. 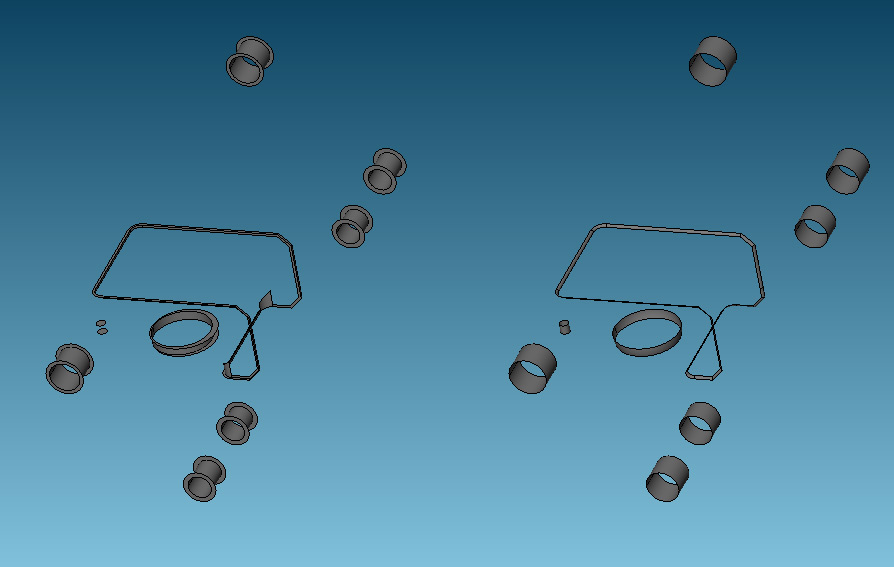 LEDAS decided to use mature geometric kernel for performing base level geometric operations, that, unlike Boolean operations, are very stable and efficient. In early 2014, C3D kernel from ASCON was chosen thanks to its quality, well-tested by several generations of KOMPAS users, and ability to deal with different formats of input CAD data. As a part of deal of LEDAS with ASCON, some part of C3D was especially tuned in order to deliver best performance to LGC technology. 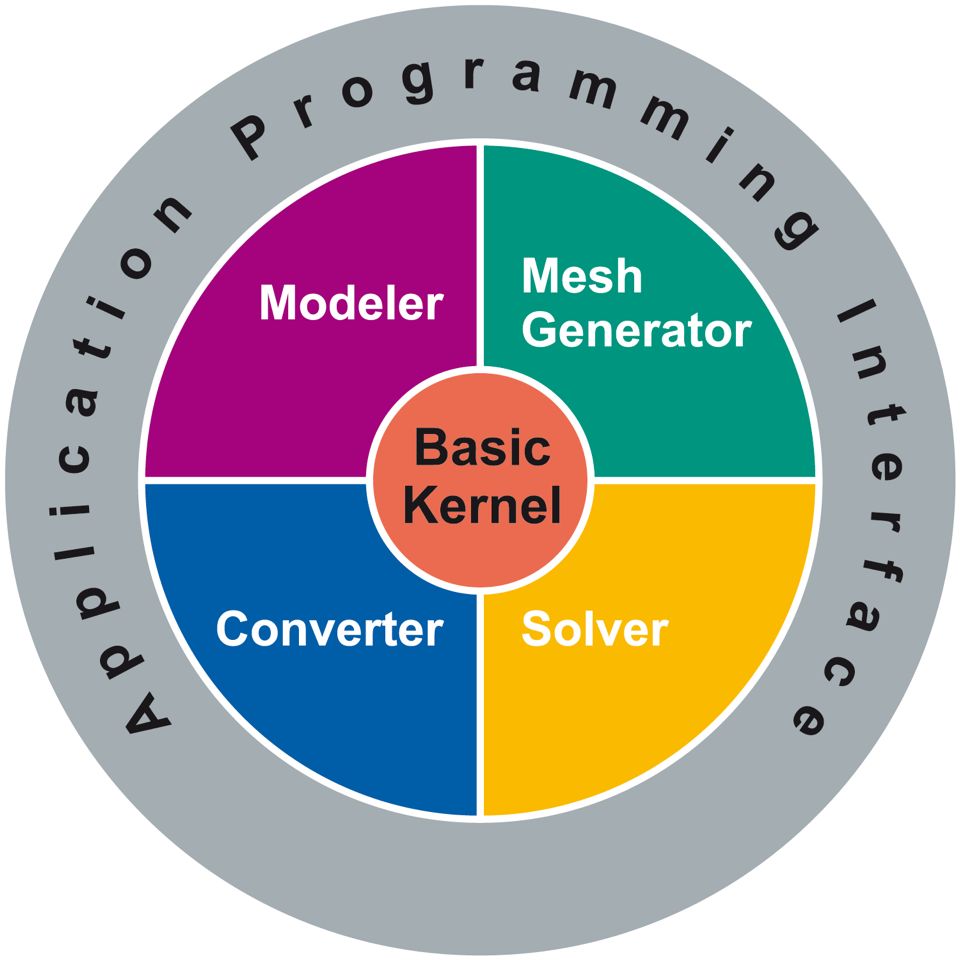 Why to choose LEDAS Geometry Comparison? 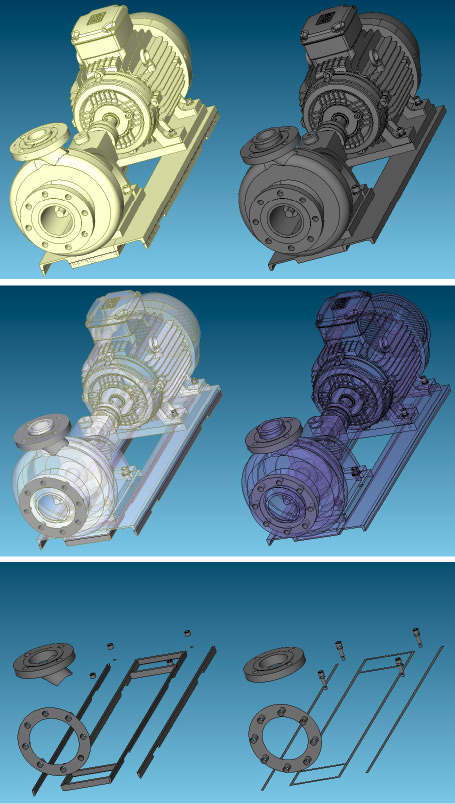 The technological advantages described above are the primary reasons why the LEDAS solution is better than that of other software firms.

Equally important, the LEDAS solution is really fast. The desktop version of LEDAS Geometry Comparison is many times faster than known competitors thanks to in-house algorithmic approach that does not use Boolean operations. LEDAS technology is natively parallel, and so the speedup of parallel version is 10-100 times faster than that of standalone version.

The specialized field of geometry comparison means that existing market solutions cost between $1,000 to $10,000 per installation, a price that is too high for many potential customers.

LEDAS breaks this price barrier by delivering component software at a price that makes entry possible for many more customers.

Summing up, the innovative LEDAS Geometry Comparison technology has the following advantages over competing solutions: